Project Greenback 2.0 aims at increasing efficiency in the market for remittances through an innovative approach: promote change inspired by the real needs of the ultimate beneficiaries of international money transfers: the migrants and their families at home.

In Project Greenback 2.0, Remittance Champion Cities are selected. The World Bank work to implement initiatives aiming at increasing transparency and efficiency in the market for remittance services. The focus is on migrants and their needs. Cooperation between migrants, remittance service providers, and public authorities is key for the achievement of the Project’s objectives.

What is Project Greenback 2.0? Check out our infographic in English - Spanish - Italian - French 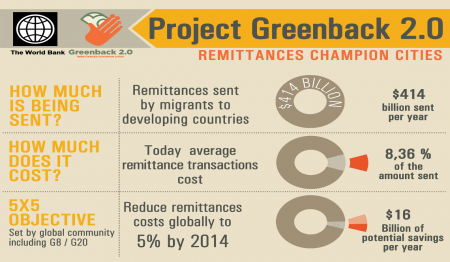 With over $400 billion officially recorded flows to developing countries remittances are a critical source of national and families’ income. However, high transaction costs and other inefficiencies in the process often adversely impact migrant workers and their families.

Some of the key challenges in effective remittance services are users’ access to information and healthy competition amongst remittance providers at the sending as well as the receiving end.

The G8 and G20 have therefore set among their objectives the reduction of the average cost of remittances by 5 percentage points in 5 years (5x5 objective). Achieving the objective would save $16 million per year: these funds would simply remain to migrants and their families and could contribute significantly to improving the living conditions of the migrants themselves as well as reducing poverty in their countries of origin.

News from the Remittance Champion Cities

Turin, Italy is the first Remittance Champion City. Here the World Bank is working in partnership with the City of Turin (i.e. the local government). The first findings from the project were presented in October 2013.
Objectives
Actions

Located in the department of Seine-Saint-Denis, near Paris, Montreuil is the fifth largest city in Ile-de-France by number of inhabitants (102,770). With a rich history, reflected in its heritage, Montreuil is characterized by its social and urban diversity, but also by its dynamism and an evolution marked by large projects.

Montreuil’s international engagement is characterized by the city’s very active role for many years, in the context of the cultural diversity of its inhabitants and very active local associations. The partnership with Yelimane in Mali since 1985, in particular, benefited from the involvement of migrants in civil society, who had a key role in the development of projects in the field. The city is also very much involved in the development of a policy supporting local diaspora organizations and other organizations working to develop international solidarity.

For all these reasons, the issue of facilitating international remittances coincides with the city’s objective of promoting a better of Montreuil’s migrants’ resources, to the benefit of their origin countries

Starting in spring 2011, Project Greenback engaged two migrant communities, the Hondurans in Washington, DC and the Moroccans in Turin, Italy. Project Greenback offered financial education workshops and organized awareness raising initiatives in the selected cities. Behavioral changes among remittance senders and recipients were documented in a video documentary. In parallel, changes in the market were monitored through constant dialogue with experts, local authorities, and market players. The Project Greenback movie premiered in Turin in May 2012.